AP — If knowledge is synonymous with power, knowing the intimate secrets of one’s DNA could be a powerful weapon. This could explain why world leaders who have rushed to Moscow in recent days for diplomatic talks have appeared to balk at the coronavirus tests administered by Russia.

But this may be a case where the imagination gets a bit ahead of what science is actually capable of.

German Chancellor Olaf Scholz refused to let Russia carry out a PCR test – while French officials said President Emmanuel Macron had balked at some of the requirements to meet Russian President Vladimir Putin, suggesting he did not want to neither of the Russian swab.

Neither leader is known to oppose COVID-19 countermeasures, so speculation has arisen that they were trying to keep genetic material out of Russian hands.

In the high-stakes world of national security and international espionage, global powers are always looking for an edge, and increasingly these new fronts are less tangible than the battlefield.

So genetic science could one day be a useful addition to the arsenal, intelligence experts say. But scientists say that day may still be a long way off.

Here’s a look at what may be – but probably isn’t – in the works:

Did the leaders really accuse Russia of trying to use their DNA for nefarious purposes?

Well no. But that hasn’t stopped the rampant speculation.

French officials bristled at questions and dismissed any notion that the Russians were trying to secretly obtain Macron’s DNA.

A French official said the conditions imposed by Russia on Macron getting close to Putin were “not acceptable” and “not compatible” with the French president’s agenda. Hence: the absurdly long marble table that Macron and Scholz shared with the Russian president and which spawned numerous memes.

German government spokesman Steffen Hebestreit said he was “reluctant” to comment after Macron’s backlash. But he told reporters in Berlin that Scholz had followed the same procedure that Germany applies to foreign dignitaries: they can submit their own PCR tests and, if in doubt, a doctor can board the plane to observe. the tests.

“The Russian side saw things differently and said: if there is a test, it must be Russian. And the chancellor decided that he would not be available for that,” Hebestreit said, adding: “But I wouldn’t interpret that too much.

Why would France and Germany have reason to be wary of Russia?

Both countries are members of NATO, which also includes the United States and Great Britain. NATO was formed during the Cold War by Western allies as a bulwark against the Soviet Union.

Russia has expressed concern that NATO is using Ukraine as a pawn to undermine Russia and cited this as the reason for its military build-up along Ukraine’s borders.

What can you really learn from DNA?

DNA is found inside every cell in the body and can be extracted by several methods – such as a nasal swab – even though a coronavirus test swab is after different genetic material: the virus’s RNA.

“These samples contain tons of human DNA,” said Kenny Beckman, who directs the University of Minnesota’s genomics center. “You can certainly take that sample, extract the DNA, and do any kind of full workup you want to do on that person.”

Your DNA contains the instructions you need to survive and grow. Each person’s DNA is unique. It can be used to find where your ancestors might have come from, if you have unknown relatives floating in the ether, and also if you have certain genetic diseases or genetic abnormalities associated with diseases or medical conditions.

In forensics, DNA can be used to physically connect someone to a piece of evidence or to eliminate someone as a suspect in a crime.

How could DNA be used against world leaders?

“You can use DNA to identify disease risk, so (world leaders) might be at risk for disease,” said Howard McLeod, genetics expert and director of precision medicine at the Oncology Consortium. geriatrician based in Florida. “You could look and see if there might be any ancestry elements that could be exploited.”

But in general, he said, the idea of ​​knowing more about someone as a world leader through DNA “probably sounds a lot scarier than it actually is.”

Beckman said it seemed “wacky” to think the information gathered could be politically damaging.

“What are you going to do, say that Macron has a slightly higher risk of hypertension?” Beckman asked. “But I don’t spend a lot of time trying to think of ways to weaponize someone’s genetic information.”

George Annas, a bioethicist who has written extensively on the importance of genetic privacy, wants to clarify one thing: “DNA is not magic. It will give you information, but it won’t tell you how you can murder someone.

But even without the ability to build an individually targeted bio-weapon, the power of suggestion can be enough to compromise world leaders, and Russia has been known to employ kompromat – blackmailing someone by threatening to leak embarrassing information to their colleague. topic.

Why can’t Putin and his guests just wear masks?

Putin has largely avoided masks throughout the pandemic – but is otherwise hypervigilant about COVID-19 measures. The 69-year-old appeared to work mostly remotely and was rarely seen in public until he was fully vaccinated with Russia’s Sputnik V vaccine (which has yet to be approved by the European Union).

Does the US insist on testing world leaders?

When dignitaries visit US President Joe Biden, they must be tested, an official says. The White House offers itself as a testing option, but most leaders organize their own, which is fine with the White House.

When Biden himself is tested at home and abroad, samples are collected and processed exclusively by the White House Medical Unit.

I am a normal person who often gets covid tests. I have something to fear?

That shouldn’t deter you from testing. 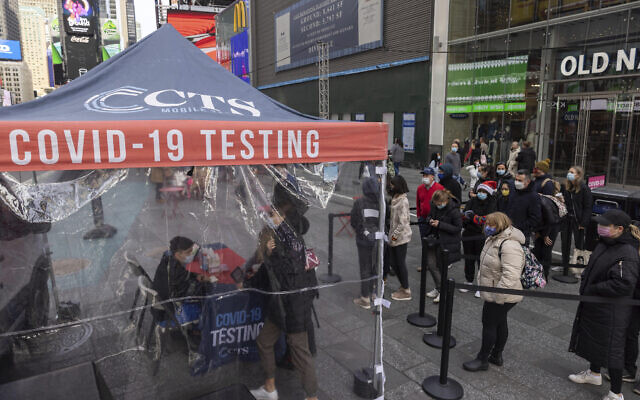 People line up to get tested for COVID-19 at a mobile testing site in Times Square on December 17, 2021 in New York City. (AP Photo/Yuki Iwamura)

In the United States, federal law prohibits medical providers and laboratories from using patient samples for purposes other than the initial test administered. In some cases, people can consent to making their results available for research, such as with health and ancestry services like 23andMe. Be careful with these services, however; even if the tests comply with US law, the data can still end up in the hands of another country.

Annas says the right to privacy is paramount no matter who you are: “Even presidents have a right to medical confidentiality, and they shouldn’t have their information released to the public without their consent.”

So, do world leaders really have anything to worry about?

The consensus is that the most a bad actor can do with DNA is generate a scandal – not a presidential clone.

But you never know where your DNA might end up: A few years ago, an anonymous group calling itself the Earnest Project claimed to have recovered DNA from a group of world leaders who attended the Davos summit. The group said it would auction the samples as a statement about the dangers of surveillance capitalism, but the auction was delayed due to legal issues and apparently never rescheduled. The band did not respond to a request for comment made via its website.

Previous How to Create a D&D Character Sheet for Neo from The Matrix
Next Latest Broker TPs, Opinions on MEITUAN-W (03690.HK) (Table) AASTOCKS Financial News